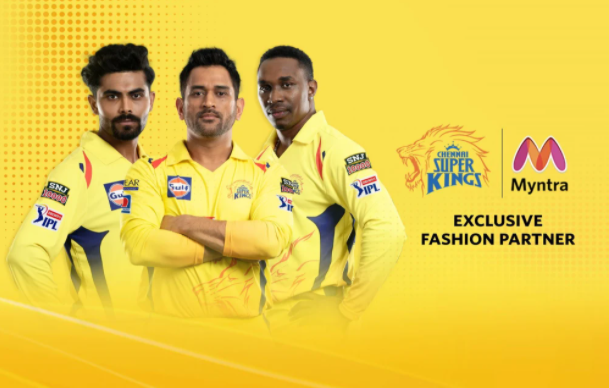 March 10: Fashion giant Myntra has recently announced its partnership with Chennai Super Kings as their official fashion partner for the forthcoming super exciting season of the Indian Premier League.

This association would ensure Myntra to promote its presence in South India with help of the strong fan base of the IPL team CSK. The strengthening process will undergo as the shopping platform will build brand salience via a complete 360-degree marketing campaign.

Myntra’s logo will also feature on the front centre of the CSK team’s jersey that the players will wear and promote. As part of the collaboration, the star players of the CSK team will also be seen in several promotional activities.

Thrilled over the partnership, the CEO of Myntra, Amar Nagaram in a statement quoted, “We are thrilled to become the official fashion partner of Chennai Super Kings for the upcoming T20 season. As the one-stop-shop for fashion in the country, this partnership will add a distinctive dimension to our fashion proposition as we await to touch millions of the Yellow Army hearts.”

Further speaking over the beneficial association, CEO of Chennai Super Kings KS Viswanathan said, “Fashion, lifestyle and sport are indelibly linked. I am glad Myntra has decided to scale up their partnership from last season and CSK is delighted to have the opportunity to access Myntra’s multi-million users in the country. We look forward to a long and mutually rewarding association.”

Myntra is involved in a huge brand expansion process as it also went into a partnership with several brands to strengthen its name everywhere. Previously, Myntra partnered with Bath & Body Works as well aiming to further strengthen its personal care and beauty category.