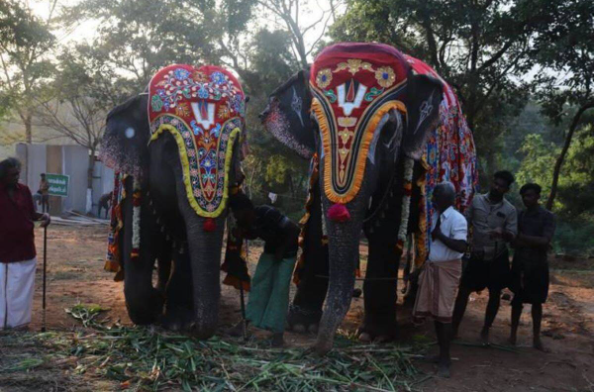 February 11: The 48-day retreat of temple elephant retreat in Tamil Nadu has begun in the state’s Thekkampatti village near Mettupalayam in Coimbatore district. As per a report by the Indian Express, this year’s annual retreat for the captive elephants began on Monday as it is organised by Hindu Religious and Charitable Trust.

The retreat was be inaugurated when the elephants were fed fruits and sugarcanes by Dindigul Srinivasan, the Forest Minister, Sevur S Ramachandran, Hindu Religions and Charitable Endowments (HR&CE) Minister and SP Velumani, Municipal Administration Minister. Beginning a few months ago, the preparations were done to make the retreat as memorable as every year.

The government of Tamil Nadu undertook the preparations, asking the mahouts and assistants to plan the event in accordance with the Covid-19 negative certifications. They will be allowed to enter the camp only upon furnishing these certifications. This camp had been a brainchild of the late J Jayalalithaa, the former Tamil Nadu CM as she aimed at providing these jumbos with rest and relaxation for some time along with the nutritious food.

In the 2021 edition of retreat, they are hosting as many as 26 elephants from across the state and the list includes the famous Sengamalum. This famous elephant became an internet sensation previously with her famous bob-cut hair.