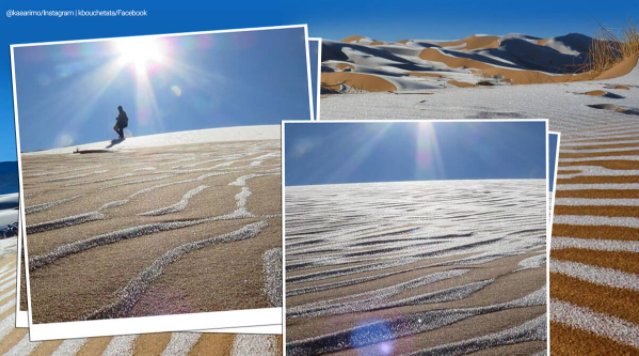 21 January: Deserts are known for their extreme hot weather and sand but something unusual happened recently in one of the deserts in the world. Sahara Desert witnessed snowfall as a result of which the temperature dropped to -2 degree Celsius.

Located in the hot continent Africa, the desert witnessed snowfall and the snow-laden pictures of the location went viral amusing the people. These photos were shared by photographer Karim Bouchetata. Capturing the surreal the Algerian photographer managed took over the Internet. The desert located in the area of Ain Sefra (known as the gateway to the Sahara Desert) of Algeria.

As shown in the pictures, the snow is covering the dry sand dunes of the desert, it is located 1000 m above the sea level and is bordered by the Atlas mountains. In an unusual, this extreme weather reached Africa and the Middle East and also, some parts of Saudi Arabia as well.

The amateur photographer clicked some stills of this phenomenal occurrence and managed to record videos as well. Here, have a look at one of those which he shared via his Twitter account:

Karim Bouchetata’s work first got recognised back in 2016, he captured the snowfall at world’s hottest desert as it appeared first time in 37 years. However, this unusual activity created a beautiful appearance in the desert area as the snow, seen in some parts of the desert, formed different designs.