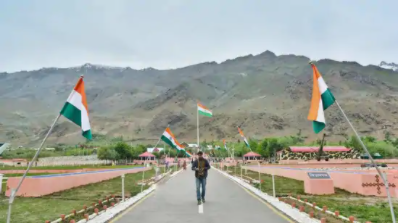 27 January: Making it an adventure tourism destination, the Centre will be creating an international level infrastructure at Kargil region which is a district of newly formed Union Territory of India, Ladakh. The information was bestowed by Union Minister Prahlad Singh Patel earlier on Sunday.

He shared the news while interacting with the reporters while on a visit to Linkipal Ski Slopes as he also claimed the Indian Prime Minister Narendra Modi has plans to promote the adventure tourism in various areas, specifically the ones with significant potential due remain unexplored due to unexplained reasons. The tourism minister says that Kargil is one such region.

Ladakh became a Union Territory back in 2019 along with Jammu & Kashmir. Patel said that he along with a high-level team from the Ministry of Tourism and Culture visited Ladakh to hold meetings with the Kargil and Leh’s hill council in order to discuss and draw the plans for the development of tourism sector in these regions.

Explaining how this plan could help facilitate many opportunities in the region, he said, “The government of India is fully committed to creating international level tourism infrastructure in the district so that a feasible environment is created for tourism and employment opportunities.”

He further added, “The Ministry of Home Affairs has opened over 100 peaks for mountaineering in the country for domestic as well as foreign tourists to promote adventure tourism, which also includes several peaks of Kargil district. Regular training and refresher courses will be organised to achieve this goal which would prove a right step in the direction of quality tourism.”