In the depths of despair of quarantine measures followed around the world due to Covid – 19 pandemic; fashion industry slump can be seen clearly visible as the industry’s fashion weeks in Paris, Milan and London are repealed.

The board members of Federation de la haute couture et de la Mode publicize on Friday announced that Paris men’s fashion week which was destined to happen from June 23 to June 28, and Haute Couture week, likely to happen from July 5th  to 9th   July stands cancelled.

According to the group, The Federation is working with its members on possible digital ways”. The Camera Nazionale della Moda Italiana also announced a week postpone of Milan Fashion Week from 19th June to 23rd June 2020 and now it will get merged with City’s women wear in September 2020.

British Fashion Council is also looking for digital ways such that they can prevent reschedule. Due to national lockdown, increase in death rates, setback from Italy, the world is getting affected. The Paris men’s and couture weeks are the upcoming fashion events to be cancelled. No one knows what’s going to happen next. Even adding brands, coming up with new collection is not going to make up for this loss, says Pascal Morand, Executive President of the Federation Francaise de la Couture.

Digital ways of selling the collection is still on but in this crisis nobody is going to pay attention towards the collections and fashion. All the innovative ways of online promotion are going into vain. Brands are draining at a very faster pace. The past fashion events of this year also did not turn up with good revenues. Shanghai Fashion Week, held past week designers live streamed from studios. Digital showrooms such as Nuorder, Joor and Ordre which allow buyers to view the virtual collection, may play a big role.

All the retailers across US and Europe have been forced to shut down their physical stores with no sign of reopening date. Couture is a big hustle at this stage. Luxury goods have come at stake as now the business model is not at all holding good. Since there are no fashion weeks, fashion shows the revenue model has flopped. The high net worth clients who were crazy about luxurious and sassy items have slashed down. People who even spend $100,000 with just a click are behind the walls due to covid-19.

After the better condition which has come out in China, a zoom show can still be done. Asia can be a ray of opportunity in near future but this season has become a total flop and it’s definitely going to take time to heal. Hope this situation comes into control soon, so that everyone can get back to their normal routine. January: To boost their online engagement, Nykaa Fashion has teamed up with beauty influencers in order to launch their mini-series, The Beauty Bar on the Nykaa Network. Nykaa is running various digital initiatives to keep up with its consumers ever since the lockdown was imposed in the previous year over the covid spread.

The interactive latest mini-tutorial series The Beauty Bar will have influencers giving tips to the viewers using the Nykaa products available at e-commerce platform of the brand. This would give shopper’s a piece of advice who are right now preferring online shopping while sitting at home. This would be done in place of the services and consultations the customers receive while in store.

Nykaa previously announced on Facebook that the celebrity make-up artist Ojas Rajani would come on January 16 to teach a Wedding Guest Look in a masterclass focusing the wedding season along with tips and tricks of make-up.

Other than this, Vibhuti Arora would be leading a skincare masterclass titled Skin Revival 2021 on the same day. She will showcase trending skincare techniques focusing on how to take good care of the skin naturally.

Other than increasing their digital mark, the brand has been on foot after lockdown to restart its ‘brick and mortar’ expansion. Nykaa Fashion recently announced its first store in New Delhi’s Ambience Mall. Further, their new stores are also opening in Thrissur and Thiruvananthapuram, among other locations in the country. 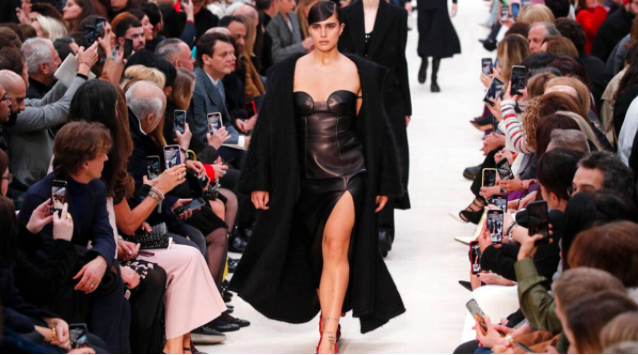 January: French fashion’s regulatory body has ended the confusion and decided to go digital over the Paris Fashion Week. This month’s Paris men’s and haute couture will witness strict audience free amid the covid fear. The Federation de la Haute Couture et de la Mode told the luxury houses that they will not be allowed to invite guests this season as they got instructions by the police.

Even though Paris is not technically under lockdown, strict restrictions limited the movement in place nationwide which also include a 6pm or 8pm curfew. Also, a repeated failure in obeying the rules may lead you to a six-month prison sentence. Keeping the restaurants, bars, cinemas, theatres and museums shut, France’s second lockdown ended on 15 December.

In a statement to the AP, the federation said on Monday that “we confirm that there can be no public gatherings at Paris Fashion Week.” He further added, “houses can still organize ‘real’ runway shows with models broadcast live, provided that their events take place behind closed doors.”

In order to maintain the social distancing norms and the stringent restrictions, the French fashion regulatory body is practicing every necessary step. January: Spanish fashion brand Desigual has expanded its online presence through Tata CLiQ Luxury. Earlier, Desigual forayed its Indian presence with help of retail group Tablez. The brand partnered with Tata CLiQ Luxury to bring the unique designs and products of Desigual to customers across the country. The development came after the brand witnessed a great response from its first concept store in Delhi.

Adeeb Ahamed, managing director at Tablez quoted as saying in a press release by Desigual, “We are excited to partner with Tata CLiQ Luxury to make Desigual’s product portfolio more accessible to our existing and new customers. The collaboration envisions bringing together Tata CLiQ Luxury’s extensive reach with Desigual’s high fashion offering, to deliver a seamless shopping experience for the fashion-conscious Indian consumer.”

“We are delighted to bring Desigual, a brand much loved for its optimistic, differential aesthetic, to our discerning customers. With this addition, we are able to provide the savvy, global Indian with a truly international shopping experience – one that is focused on quality, authenticity and thoughtfulness,” said Gitanjali Saxena, business head at Tata CLiQ Luxury.

Desigual has been serving the best of their products to consumers and now aims at providing the digital presence. The Spanish brand aims at providing a unique character of its creations for the individuals wanting to be 100 per cent of themselves and express their most creative sides. The brand adjusts to needs of its buyers with the help of categories like women, accessories and footwear.